iOWN Technical Updates. As iOWN team nears the launch of the pre-Beta release of the platform, let us shed some light on how it all looks under the hood!

The platform is composed of 5 distinct layers: 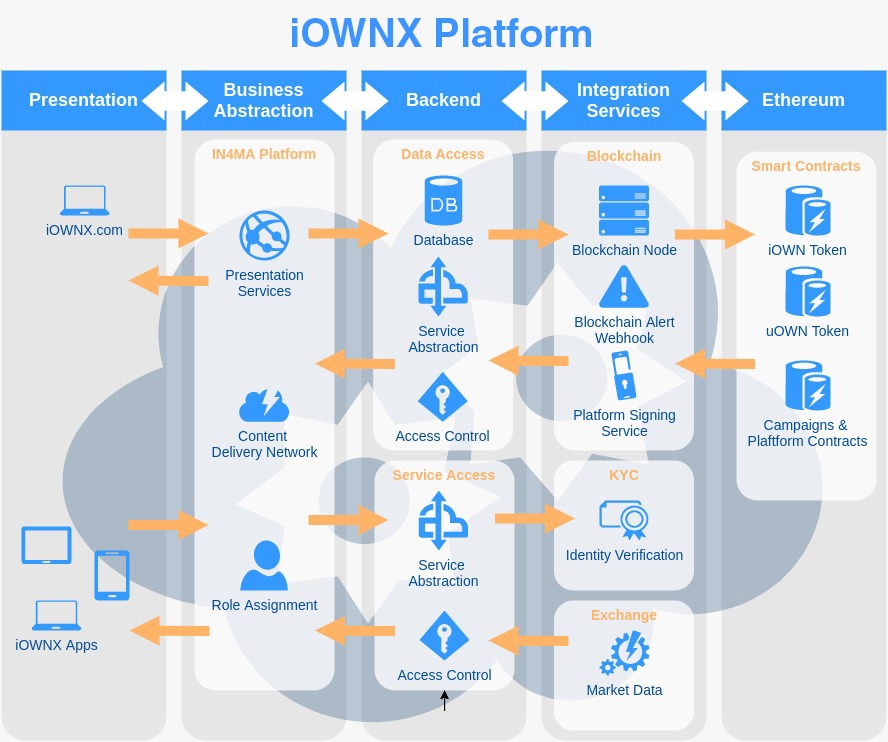 When the platform was being designed, iOWN technical department had a couple of targets in mind:

– We want to make it as customisable as possible: we can easily add/remove different steps in any business flow/logic through the business abstraction layer with just a few clicks.

– Component approach: each module/component can function on its own, and can be scrapped/replaced as needed.

– Remove limitations coming from using a specific technology, or specific 3rd party (like being stuck with 1 KYC provider, or Exchange).

The platform is hence built in mind to be versatile, and as iOWN scales, and expands to different countries, we can cope with technical demands and customizations easily to meet the needs of growth, and the legislative and legal requirements of new countries and jurisdictions.

We can’t talk platform without looking at the contracts! 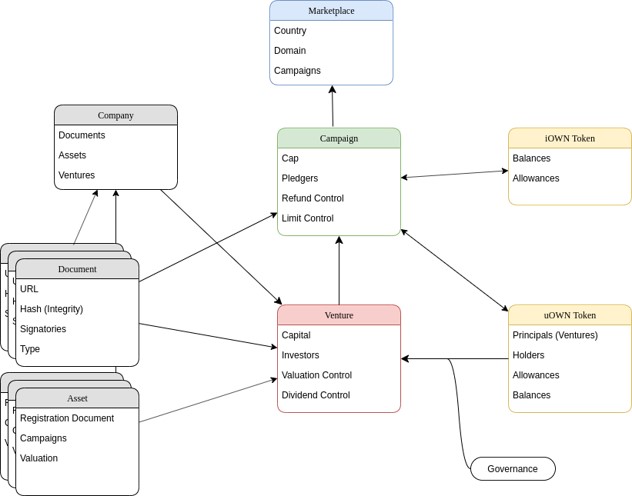 For example: A company creates multiple Ventures, which have multiple Campaigns

A Campaign or Venture or Company have different Documents which need to be signed.

Here is an example

We can use a coffee shop as an example:

Company CoffeeX decides to expand into the UAE, so it creates a Venture at $1,000,000 for its UAE expansion that can be funding in 1 Campaign, or multiple.

And each branch being opened (lets say 2 branches in Dubai, and another 2 in Abu Dhabi) have their own properties which need to be rented –> Assets.

And all of those entities have legal documents, represented for integrity on Blockchain “Document” contracts.

What is an iOWNX Campaign actually?

Think of the Campaign Smart Contract as a Negotiations Table, the parties are the Businesses and the Investors, each party brings their part on the table, Businesses (or Fundraisers) bring “uOWN Tokens” representing ownership (or goods) while investors bring money “iOWN Tokens” which represent payment.

Once all items are on the table, and the parties are in agreement (caps are reached, documents are signed..etc). Then the Campaign Contract will guarantee that every party will get what is rightfully theirs at the end of the deal!

We’ll keep you posted with more details as we are releasing the various items, and meanwhile we thank you for being iOWNers and part of this awesome group!