With environment-friendly cryptocurrency gaining popularity, Proof of Stake could be a game-changer.

The conversations about Bitcoin’s environmental impact are never-ending and they have gathered momentum in the past month. While Bitcoin is at the centre of the storm, it is a challenge that is true to other cryptocurrencies that run on Proof on Work (PoW) like Ethereum.

With decentralization at its core, cryptocurrencies require a network of specialized computers called ‘Mining rigs’ to keep the network running.

Even as talks and efforts are underway to minimize the carbon footprint of Bitcoin, some investors are bullish about green cryptocurrencies like Cardano and Ethereum 2.0 gaining prominence in 2021. Let’s dig further to know if greener solutions are the future of cryptocurrencies.

The Impact of Bitcoin

Around the world, thousands of computers requiring enormous computing power are crushing complex math problems to sustain Bitcoin. Huge amount of electricity is required to complete these transactions – a bone of contention among cryptocurrency critics.

Even though it is difficult to precisely calculate the amount of electricity Bitcoin uses, the community agrees that it is an energy-intensive business. Researchers at Cambridge University suggested that mining for Bitcoin consumes around 121.36 terawatt-hours (TWh) a year, which means it uses more energy than Argentina.

The topic gained headlines in May this year when Tesla CEO Elon Musk said his company would stop accepting Bitcoins for the purchase of vehicles as they use fossil fuels.

Blockchain believers have been suggesting a better way to overcome the environmental implications of Proof of Work (PoW) by paving path for Proof of Stake (PoS).

Proof of Work Versus Proof of Stake

To comprehend how PoS is energy efficient, it is important to understand what differentiates it from PoW.

In Proof of Work, multiple parties undertake the task of verifying transactions stored in the blockchain. Thousands of computers around the world participate in this decentralized blockchain verification.

To participate, Bitcoin miners need to use ASIC machines with a significant amount of computing power knows as Hash Rate, equipped with specialized computer chips, semiconductors, a cooling facility a continuous supply of electricity to facilitate the process. The process of verifying the blockchain by the miners is energy-intensive and any cryptocurrency built on Proof of Work will require ‘insane’ use of energy, as Musk says. 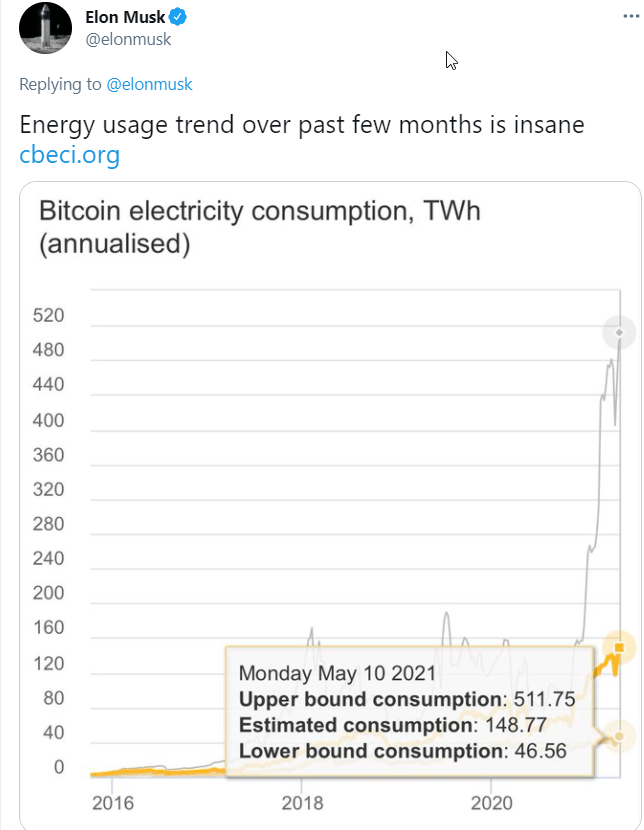 In Proof of Stake, users create a node run by one individual or a pool of users working together. To create a node, a certain number of crypto coins are locked away like depositing money in an escrow account through a process called ‘Staking’. These nodes are responsible for validating and publishing blocks on the chain.

For verifying each block of the transaction, the algorithm selects a node by taking into consideration factors like the number of coins staked and keeping a check on the monopoly on the system.

As PoS doesn’t rely on a computer’s computing power and nodes are virtual rather than physical tools, it is an energy-efficient solution.

Developers at Bitcoin’s better-known rival Ethereum, which also uses Proof of Work, have been working on ways to eliminate the problem of carbon emissions by transitioning the blockchain to Proof-of-stake.

With the transition, ETH is set to reduce its energy consumption drastically in the coming months. Estimates by Digiconomist suggest that Ethereum miners currently consume 44.49 TWh per year, rounding up to 5.13 gigawatt on a continuing basis. Going by conservative estimates, PoS is ~2000x more energy efficient, which reflects a reduction of total energy use by at least 99.95%.

Ethereum network uses about 5.13 gigawatts of power, roughly around the consumption of Peru. With the switch to ETH 2.0, the global consumption would drop to just 2.62 megawatts, equivalent to 2,100 American homes.

Given the benefits of green cryptocurrencies, iOWN Token is rooting for Ethereum’s transition to Ethereum 2.0 PoS. An ERC223 token, iOWN Token utilizes smart contracts for enabling processes within its blockchain-based equity crowdfunding platform, iOWNX. The platform was conceptualized to bridge the gap between investors and businesses seeking funds.

How Cardano Is Winning the Energy-Efficiency Game

As Cardano, which describes itself as the ‘most environmentally friendly currency’, relies on Proof-of-Stake, it requires lower computing power and hence its energy requirements are significantly low. Cardano Founder Charles Hoskinson in April said that the currency’s consensus protocol is 1.6 million times more efficient than Bitcoin, making it four million times more energy-efficient.

So, while Elon Musk’s statement had a knock-on effect on most of the cryptocurrencies, Cardano’s ADA managed to sail through the price fall and soared by 20%. The reason the coin held its own is that its PoS protocol values the percentage of coins a miner holds rather than the computing power.

Setting aside the environmental benefits of Cardano, the fact that it focuses on smart contracts and can be used to build decentralized applications makes it a tough competitive alternative to Ethereum and Bitcoin.

In conclusion, is it safe to say Proof of Stake is the solution to cryptocurrency’s environmental concerns? The general consensus is yes.

Cardano, which has the fourth-largest market capitalization is enabled by Proof of Stake. Other currencies to use PoS include Polygon, Tezos, EOS, Polkadot among others.

The crypto community is also closely following Ethereum 2.0, which will transition the platform from PoW to PoS. The switch of Ethereum to PoS is complicated and will involve different levels before the swap will officially happen but it is expected to drop the energy usage by 99.95%, according to their blog published in May 2021.